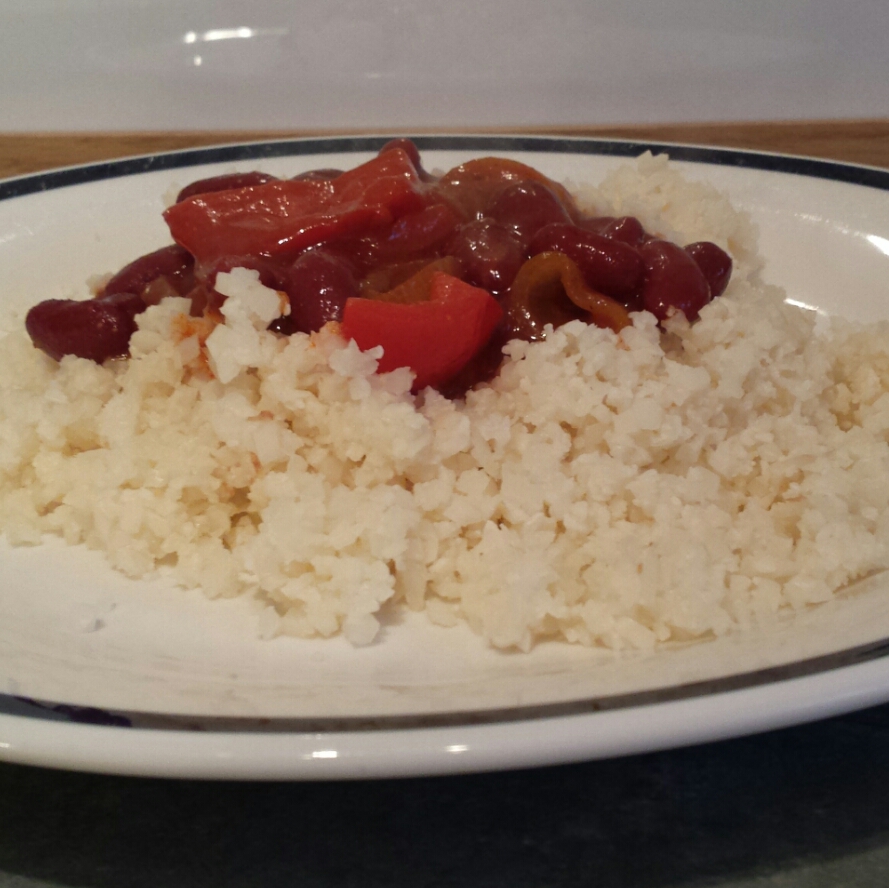 One of the Allergy Brothers’ more unusual and limiting allergies is that they react to rice.  Yep, plain old boiled rice makes them really ill.  I have only ever met one other family with this problem and it was like meeting an old friend because we instantly understood.  Rice is hiding all over the place.  Sometimes, it’s used as flour in dried fruit products.  Sometimes, it’s used in the form of syrup as a sweetener.  Sometimes, it’s used as a milk substitute in dairy free products.   It’s almost always in gluten free, baked goods.  Basically, I would like rice to just go!

I had read about using cauliflower as a rice substitute, but I was sceptical for two reasons.  One, I definitely don’t have the time to be making cauliflower into rice sized pieces.  Secondly, after all that effort, I was pretty sure it was going to taste yuck.  So I was pleased to see that Cauli Rice have produced a ready made version.  You just put the pouch in the microwave for 3 minutes (you can also dry fry it, but I haven’t tried that yet. I guess egg eaters could make egg fried Cauli Rice…).  This seemed simple enough for me, but what about the taste issue?  Well, it definitely does taste a bit like cauliflower still so it really depends how you feel about that.  I like cauliflower and I usually use rice to accompany flavourful, spicy foods so the taste of the Cauli Rice was not an issue for me.

As you can see from the photo of my dinner (Cauli Rice and a vegetable chilli), the Cauli Rice looks fairly similar to rice.  This was actually a problem for us because we just could not convince Allergy Big to try the Cauli Rice as he was so sure it was regular rice!  Ah well, hopefully with time we will win him over as Cauli Rice is definitely joining our roster of regular groceries.  In fact, I have just bought the Indian pilau version to try as well.